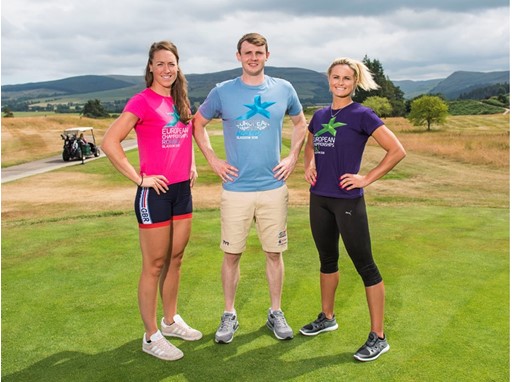 Double Commonwealth Games medallist Ross Murdoch, Olympic rower, Karen Bennett and Ladies European Tour golfer, Carly Booth today (Wednesday 11 July) challenged each other in each of their sports.
The Glasgow 2018 ambassadors undertook a mini competition of a 50m sprint in the pool, a 2000m rowing race and a putting and chipping golf challenge.  Aquatics, Rowing and Golf - alongside Cycling, Gymnastics and Triathlon will all feature in the inaugural European Championships being hosted by Glasgow and Scotland 2 to 12 August 2018.
Results of the challenges will be revealed through @glasgow2018 in the coming days.
Ross, the reigning European Champion in the 200m Breaststroke, was first off the blocks at his home pool at the University of Stirling to show Karen and Carly just how it should be done and provide some top tips for success, before they raced head to head over 50m.
Looking forward to defending his European title at the Tollcross International Swimming Centre, the pool where he set the Glasgow 2014 Commonwealth Games on fire for Team Scotland on the opening night he said: “Winning gold at the Glasgow 2014 Commonwealth Games was such a special moment for me and is one of the highlights of my career. I will always remember the amazing atmosphere in the pool that week with the home crowd cheering us all on.
“I can’t wait to be back there in only three weeks-time to defend my European title. The standard of the swimming will be so high, with many of the best swimmers in the world coming from European nations and it will be a great opportunity to witness some really exciting racing. I hope people in Scotland will get behind us once again and come along to cheer the British team on to victory.”
Next to show off her prowess, was 29-year-old Edinburgh rower Karen Bennett. Karen won a historic Olympic silver in Rio as part of the women’s eight and also hopes to be named on the British team for Glasgow 2018 next week. Karen set Ross and Carly a rowing ergo challenge and whilst she made it look easy, the novices soon realised that keeping up the stroke rate and holding the required technique for the 2000m competition distance was not as easy as it looked!
Speaking about her sport, Karen explained:  ”Rowing isn’t a sport that everyone is familiar with and the Glasgow 2018 European Championships is a great opportunity for people to come along and see something new and enjoy an action packed family day out at Strathclyde Country Park.
“The last time the British team had an international competition of this stature on home soil was at the London Olympic Games back in 2012. The atmosphere was brilliant and it certainly inspired me to train even harder to get into the senior team for Rio in 2016. Scotland and Great Britain both have a strong rowing pedigree and we are certainly aiming to be well amongst the medals at the European Championships in Glasgow next month.”
The Rowing events get underway on the first day of the Championships on 2 August.
The final challenge of the day was set by Ladies European Tour golfer, Carly Booth, who demonstrated the importance of a player’s short game, with a putting and chipping challenge at the glorious Gleneagles PGA Centenary Course, Perth and Kinross, which will play host to the first ever European Golf Team Championships from 8-12 August.
Booth, who became the youngest ever ladies club champion in Scotland aged just 11 and who grew up just 15 miles from Gleneagles said: “This is an exciting new ground-breaking event which will see men and women playing in a 50/50 field for equal prize money, with an innovative new format including a mixed team event. I think it is a great opportunity to enhance the profile of women’s golf and to show that in terms of quality, the leading women can play competitively alongside men.
“Glasgow 2018 will be the first time golf has been involved in a multi-sport event since the Olympics. It is rare that golfers get the opportunity to play in a team format and to represent their country, which will make it even more special. The atmosphere at Gleneagles for the 2014 Ryder Cup was incredible and the women from all the European countries will be excited to play here for the European Golf Team Championships, ahead of next year’s Solheim Cup.”
Details for tickets to watch the Swimming, Rowing and Golf at the Glasgow 2018 European Championships can be found here: https://bit.ly/2uviyO7