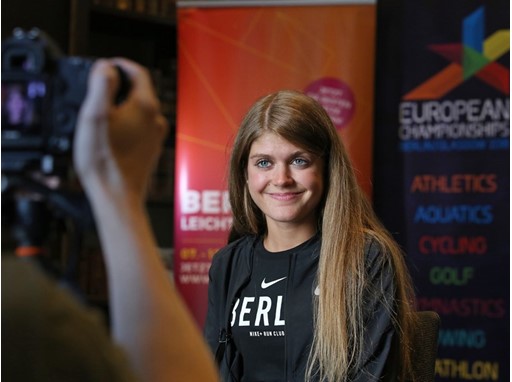 BERLIN – Coming off strong seasons in 2017, middle distance runner Konstanze Klosterhalfen (GER) and sprinter/hurdler Karsten Warholm (NOR) said Friday they are eager to fight for European glory this August at the Berlin 2018 European Athletics Championships as the world’s leading athletic footwear and apparel company Nike signed as Official Partner of the event.
The 21-year-old Klosterhalfen won the silver medal at the European Athletics Indoor Championships in Belgrade last year. Warholm, meanwhile, triumphed at the London 2017 World Championships, winning gold in the 400m hurdles. Both are looking for a return to the podium at Berlin 2018.
“To be taking part in the European Athletics Championships is already a big thrill,” said Klosterhalfen. “But to do so on home soil in Berlin and then hopefully do one better than my silver from the indoors last year is an amazing opportunity that I am really looking forward to.”
Warholm concurred: “I am really looking forward to running in Berlin. I visited the stadium with my grandfather just a few years ago and it is an incredible place. Back then I was at a level when I could only dream of running on that famous track and now suddenly I have the chance to win gold there in August against the best in Europe. All I can do is run as fast as I can and hope it is good enough to beat my opponents.”
With just over 100 days to go until the start of the European Athletics Championships, it was announced Friday that Nike will be Berlin 2018’s Official Partner. As part of its strategy, Nike recently identified the German capital as one of its 12 key cities around the world. The strong connections Nike is building with Berlin enable them to serve the local consumer personally and at scale in going after their sports goals.
All of this makes for a perfect fit for Nike and Europe’s preeminent sports competition.
“We are delighted to be part of the Berlin 2018 European Athletics Championships,” said Bert Hoyt, VP/GM, Nike EMEA. “Nike’s mission is to bring inspiration and innovation to every athlete in the world, and this partnership will allow us to better serve athletes in sports obsessed Berlin and beyond.”
European Athletics President Svein Arne Hansen said the partnership with Nike underscores not only the importance of the European Athletics Championships but also the broad appeal of the event. “Berlin, the European Championships and Nike are great match for each other,” he said. “A world-class sporting event supported by the leading manufacturer of athletic footwear and apparel, in a world-class city – the eyes of Europe and beyond will be on us this August and together we will not fail to deliver.”
Berlin 2018 forms part of the first multisport European Championships this August in Berlin and Glasgow – a major new multisport event taking place every four years, supported by Europe’s free-to-air broadcasters, which aggregates the existing senior continental championships of Athletics, Aquatics, Cycling, Gymnastics, Rowing, Triathlon, with a new Golf Team Championships – all unified under a common brand.
The world-class sporting and cultural cities of Glasgow and Berlin will host the first edition of the Championships from 2-12 August 2018. The vision for the event is to create a must-watch, must-attend experience that elevates the Champions of Europe during an 11-day celebration of sport and packed 10-day broadcast schedule.
For more information, please contact James Mulligan, Head of Communications at European Athletics at james.mulligan@european-athletics.org or by telephone at +41 79 694 48 29.
NOTES TO EDITORS
1. The 2018 European Championships will be staged by seven European Sports Federations and the Host Cities of Berlin and Glasgow.
2. The Berlin 2018 European Athletics Championships will be held between Tuesday 07 August and Sunday 12 August. The Glasgow 2018 sports programme will start with a day of qualifications on Thursday 02 August and will run until Sunday 12 August.
3. The EBU is the broadcast partner of the Championships and, to date, has signed agreements with almost 40 broadcasters to ensure the event will be viewed by the widest possible audience, free-to-air in all major markets. Its business arm, Eurovision Media Services, will be acting as host broadcaster, through its subsidiary European Production Coordination, and will be responsible for distributing the event to rights-holding media organizations worldwide.
4. In total, the European Championships will span 10 days of television programming from Friday 03 August to Sunday 12 August 2018. The event has a potential television audience of around 1.03 billion with many more viewers across multiple digital platforms. There will be up to 300 hours of host broadcaster coverage, and an anticipated 2,700 hours of television coverage.
5. A total of 1,500 athletes will compete in Berlin, with around 3,000 athletes competing in Glasgow.
6. Berlin's Olympic Stadium will be the venue for the European Athletics Championships with the road races and race walking events held throughout the city.
7. NIKE, Inc., based near Beaverton, Oregon, is the world’s leading designer, marketer and distributor of authentic athletic footwear, apparel, equipment and accessories for a wide variety of sports and fitness activities. Their mission is to bring innovation and inspiration to every athlete*.
(*as long as you have a body, Nike considers you to be an athlete)