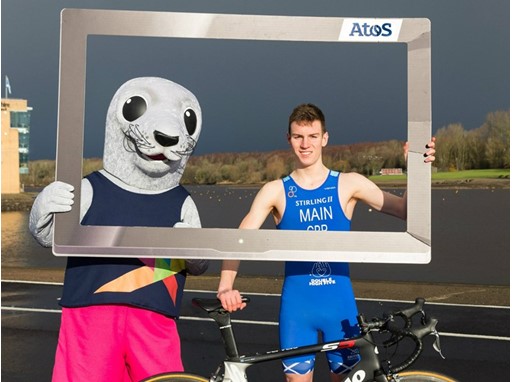 Media release
Friday 2 February 2018
Atos, a global leader in digital transformation, has been appointed as Digital Media and Central Results Services Provider to the Glasgow 2018 European Championships – an exciting new multi-sport event.
Already an Official Timing, Scoring and Results (TSR) Provider and Proud Supporter of the Championships, Atos will also help deliver a robust digital presence for the event following a competitive tendering process.
Atos will be working in partnership with Edinburgh-based agency Signal to design and develop the Glasgow 2018 and European Championships websites.
Atos will also be responsible for processing and distributing live results for all seven sports across Glasgow and Berlin and delivering live schedule and results pages to help sports fans and attendees access up-to-date information on the Championships.
A 2018 European Championships mobile application will also be created. Available from summer 2018, the ‘app’ will give fans access to medal tables, news and live schedules and results.
Atos and Signal previously combined their expertise and experience to ensure the digital success of the Glasgow 2014 Commonwealth Games.
To be staged every four years, the European Championships will combine the existing European Championships of Aquatics, Cycling, Gymnastics, Rowing and Triathlon, along with a new Golf team championships and Athletics staged in Berlin.
Glasgow 2018 Championships Director Colin Hartley, said: “There are now less than 200 days to go until the biggest sporting event since the Commonwealth Games comes to Glasgow, and Scotland. The first ever European Championships will be a new highlight in the global events calendar.
“Atos has an established track record in delivering digital services to large scale multi-sport events. The integrated online platforms they produce will allow people to keep up to date with the latest action and engage with the Championships, ensuring we deliver a must attend, must watch event.”
Gavin Thomson, Senior Vice President for Big Data and Security UK&I, Scotland, Ireland and Wales at Atos, said: “We are delighted to play a leading role in delivering the 2018 European Championships, having successfully provided leading edge IT solutions for the Commonwealth Games in Glasgow, and the Olympic and Paralympic Games for over 20 years.
“We warmly welcome the opportunity to be part of this new global sporting event and the digital transformation challenge of bringing the Championships to a multi-platform, digital-first worldwide audience. Our bespoke real-time service will enable fans to keep up to date with scores and results from anywhere in the world.”
As part of the inaugural European Championships in 2018 around 3,000 athletes will visit Scotland for six events - Aquatics, Cycling, Golf, Gymnastics, Rowing and Triathlon – while a further 1,500 athletes will compete in Berlin as part of the European Athletics Championships.
Attendances of up to 250,000 are expected at venues across Glasgow and Scotland, with a potential TV audience of up to 1.03 billion.
Ends
FOR MORE INFORMATION CONTACT:
Corrie Campbell, Glasgow 2018 Public Relations Officer, +44(0)141 302 2294 / +77(0)7387 253248 corrie.campbell@glasgow.gov.uk
NOTES TO EDITORS
GLASGOW 2018 BACKGROUND INFORMATION:
1. The 2018 European Championships will be staged by the European Federations and the Host Cities of Glasgow and Berlin.
2. The Glasgow 2018 event will be held between 2nd and 12th August and the European Athletics Championships will be between 7th and 12th August in Berlin. Further information is available at www.glasgow2018.com.
3. The European Broadcasting Union (EBU), the umbrella body for Europe free-to-air channels, will be the broadcast partner for the Championships. There is a potential television audience of around 1.03 billion for the event with many more viewers across multiple digital platforms.
4. Around 3,000 athletes will travel to Scotland as part of a total delegation of around 8,500 including officials, media and others. A further 1,500 athletes will compete in Berlin.
5. Berlin's Olympic Stadium will be the venue for the European Athletics Championships with the road races and race walking events held throughout the city.
6. The European Aquatics Championships will take place at Glasgow's Tollcross International Swimming Centre, with Diving taking place at Edinburgh's Royal Commonwealth Pool, Open Water Swimming being staged at Loch Lomond and Synchronised Swimming at Scotstoun Sports Campus.
7. Four European Cycling Championships will be staged in Glasgow and its metropolitan area. Track, Road, Mountain Bike and BMX will attract 650 of Europe’s top names to the Sir Chris Hoy Velodrome, the Cathkin Braes Mountain Bike Trails, the streets of Glasgow and the metropolitan area and a new world championship and Olympic standard BMX track to be built in the Knightswood area of the city.
8. The European Golf Team Championships will take place at the Gleneagles PGA Centenary Course in Perth & Kinross. There will be three European Team Golf Championships: Men’s Team Championship, Women’s Team Championship and Mixed Team Championship.
9. The European Artistic Gymnastics Men’s and Women’s Championships will be staged at The SSE Hydro, the venue for the 2015 FIG World Gymnastics Championships.
10. The European Championships for both Rowing and Triathlon will both be staged at Strathclyde Country Park in North Lanarkshire.
11. The Year of Young People 2018 will be the next of the Scottish Government’s series of themed years, following the Year of History, Heritage and Archaeology 2017. The Year of Young People (YOYP) will inspire Scotland through its young people aged 8 to 26, celebrating their achievements, valuing their contributions to communities and creating new opportunities for them to shine locally, nationally and globally. Further information on what’s happening and how people can get involved can be found on the new website yoyp2018.scot or @YOYP2018 on Twitter.
12. Glasgow 2018’s official partner level sponsors are Glasgow City Council and Scottish Government. For more information on Glasgow 2018’s full sponsor family, please visit
www.glasgow2018.com/championships/about-european-championships/official-sponsors