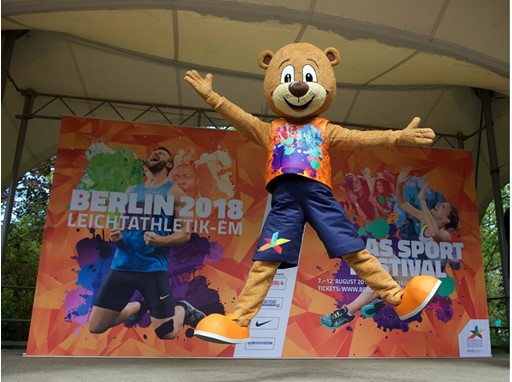 In what is being described as the most bearish comeback of the year, the loveable Berlino has been named official mascot of the Berlin 2018 European Athletics Championships from 7-12 August 2018.

Berlino first wowed audiences nine years ago at the Berlin 2009 World Championships. The fuzzy mascot was such a hit with spectators that he was brought back to entertain the masses at the Internationales Stadionfest (ISTAF) and ISTAF Indoor championships a few years later.

The bombshell announcement dropped during an interview between TV presenter Jessica Kastrop and Olympic discus champion Robert Harting. Berlino crawled out of a large box before falling into Harting’s arms – a reunion nine years in the making.

“It’s great that Berlino is back,” Harting said. “We’ve been buddies since I won my World Championships title here in 2009.”

Berlino joins Bonnie the Seal, who will be the mascot for co-hosts Glasgow 2018, who are organising six of the seven sport of the inaugural multi-sport European Championships.

In contrast to 2009, Berlino now sports a colourful outfit in keeping with the festival theme of the European Championships. During the event, Berlino will appear at both hotspots – the Berlin Olympic Stadium and the European Mile at Breitscheidplatz.

Berlino is not the only reason spirits are high among the Berlin 2018 team. The organisers are also buoyed by strong ticket sales. Three months before the event, 200,000 tickets have already been sold. For the evening session on Saturday 11 August, nearly 40,000 tickets have already been snapped up. All of this should translate into big, supportive crowds for the athletes as they compete for gold this August.

As the total capacity of the Berlin Olympic Stadium has been reduced to 55,000 seats due to the Live Mixed Zone, additional work spaces in the upper tier, and reserved seats for athletes and coaches, the public is encouraged to buy tickets as soon as possible or risk missing out.

As an appetizer for athletics enthusiasts, a "Day Q" has been organised for Monday, 6 August. Day Q will provide free entry and free choice of seats in certain blocks to anyone who wishes to follow the qualification rounds for hammer throw and long jump, as well as the first heats of the 100m and 400m hurdles. The free tickets are only available online and as e-tickets at www.berlin2018.info/tickets.

The world-class sporting and cultural cities of Glasgow and Berlin will host the first edition of the Championships 2-12 August 2018, and the European Broadcasting Union (EBU) already has agreements with almost 40 broadcasters worldwide to cover the event. There will be up to 300 hours of programming across television, radio and online, free to air in all the main markets, with an anticipated 2,700 hours of television coverage across the Championships.

The vision for the event is to create a must-watch, must-attend experience that elevates the Champions of Europe during an 11-day celebration of sport and packed 10-day broadcast schedule backed by free-to-air television through EBU.

European Mile and cooperation with the Berlin Zoo

The cultural and sports program European Mile will bring the action from the stadium directly into the city, culminating in a festival atmosphere at Breitscheidplatz in the west of the city. In addition to hosting the finish lines for the walking and marathon competitions, the square will stage the men's shot-put qualification and most victory ceremonies. The Berlin Zoo across the road will also play an important role as it will offer a warm-up zone for all walking and marathon competitions.

For seven days, a unique architectural landscape will be created in Berlin’s City West, where European athletics can be experienced every single day. A striking 400m blue track will snake around the Breitscheidplatz so that visitors can also get active. The centrepiece is an arena for almost 3,000 spectators featuring a stage that will host the victory ceremonies in the evening for the first time in the history of continental championships. Since 1934, there has never been a victory ceremony held in the centre of a host city.

In addition to the sporting competitions and victory ceremonies, an attractive and diverse program with interactive athletics modules, music and shows await the visitors.

Quotes for editorial use

“I am looking forward to the biggest sporting event of the year in Germany and I am convinced that Berlin 2018 will be a great success. The organizing committee, led by CEO Frank Kowalski, is doing a fantastic job. We will see great athletes who will do their best. Of course, due to my background, I will concentrate on the Norwegian athletes. When the European Championships are finished on August 13th everybody should say ‘I’m a Berliner.’”

“The European Championships 2018 in Berlin on home soil will be groundbreaking for athletics in Germany. When the first starting signal is given in 100 days, all eyes will be on our sport and we want to make the best of it. The return of Berlino, free tickets on Day Q and the victory ceremonies at the European Mile in the heart of Berlin are the latest of many measures designed to ensure everyone sees the full potential of athletics at the European Championships. In summer, we will be celebrating a sports festival where goose bumps are guaranteed. Everyone is invited to join the celebration! The organising team is putting the pedal to the metal now – just like our athletes with their preparations.”

Dr. Clemens Prokop (Chairman of the Supervisory Board Berlin 2018):

“I still remember our bid to host the European Athletics Championships. That was five years ago. And now we are on the final stretch of preparations. The organising team has already done great things, with many innovative ideas, and the pre-sale numbers speak for themselves. The last 100 days will focus on preparing the athletes and spectators in Berlin for unforgettable title fights. It should be a festival atmosphere at the stadium and at the city centre at Breitscheidplatz that sets new standards and will generate enthusiasm.”

“With 200,000 tickets already sold, we are fully on track. This huge success has never been achieved before by an European Athletics Championships at such an early stage. We expect another boost when the season starts. Our ambitious goal is 350,000 tickets and we will do everything to reach that goal.”

1. The 2018 European Championships will be staged by seven European Sports Federations and the Host Cities of Berlin and Glasgow.

3. The EBU is the broadcast partner of the Championships and, to date, has signed agreements with almost 40 broadcasters to ensure the event will be viewed by the widest possible audience, free-to-air in all major markets. Its business arm, Eurovision Media Services, will be acting as host broadcaster, through its subsidiary European Production Coordination, and will be responsible for distributing the event to rights-holding media organizations worldwide.

4. In total, the European Championships will span 10 days of television programming from Friday 03 August to Sunday 12 August 2018. The event has a potential television audience of around 1.03 billion with many more viewers across multiple digital platforms. There will be up to 300 hours of host broadcaster coverage, and an anticipated 2,700 hours of television coverage.

5. A total of 1,500 athletes will compete in Berlin, with around 3,000 athletes competing in Glasgow.

6. Berlin's Olympic Stadium will be the venue for the European Athletics Championships with the road races and race walking events held throughout the city.