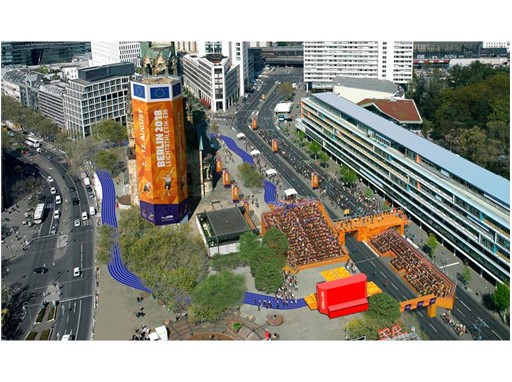 With 50 days to go until the start of the Berlin 2018 European Athletics Championships, the Local Organising Committee presented their ambitious plans for the European Mile, as well as detailed visuals for the area in and around Breitscheidplatz, to an audience including reigning European champions David Storl and Cindy Roleder on Tuesday 19 June.

The men’s shot put qualifying, the race walking events and the start and finish of the marathons will all take place on the European Mile, along with 38 victory ceremonies - as well as a robust cultural and entertainment programme - during the six-day event which is part of the inaugural multi-sport European Championships with co-hosts Glasgow.

A temporary arena on the European Mile will also hold up to 3000 spectators and it will be the main attraction in the City West during the championships. The European Mile also connects the Berlin Olympic Stadium and the city centre of Berlin.

“Europe expects a European Athletics Championships of superlatives,” said Berlin 2018 CEO Frank Kowalski. “With the European Mile, our involvement in the European Championships and all the technological innovations, we are working hard to ensure that we meet these expectations.”

Director of the European Mile, and former German long jump champion, Konstantin Krause, added: ”Never before has something like this been done. Athletics is taking a bold step into the right direction. Athletes, fans and officials can come together in one place of emotions and real encounter. 'Hands on Athletics' is being brought to the people.”

The European Championships will be a pan-European festival with guests from 52 countries expected in Berlin. More than 40 international television broadcasters and 1500 media representatives will also be reporting from the German capital.

Athletes, officials and media representatives will be accommodated in close proximity to the European Mile and the historic Kaiser Wilhelm Memorial Church at the Breitscheidplatz is another vital part of the European Mile.

Katharina Stifel, Pastor of the Kaiser Wilhelm Memorial Church said: “We want to provide the people coming to the Breitscheidplatz with a blue oasis – to gather new strength, to find some rest and join several devotions with reference to sports.” On Sunday 12 August  at 10:00, an ecumenical service will be held to conclude the European Championships.

Reigning European champions are getting ready for Berlin

Reigning European indoor and outdoor champion Cindy Roleder was in Berlin for the 50 days to go countdown ceremony and the 28-year-old is looking forward to defending her 100m hurdles title on home soil in the Olympic Stadium in August.

“Fifty days to go until Berlin 2018, 51 days until my competition. I am in great shape and looking forward to a spectacular event,” she said.

Reigning three-time European champion David Storl will begin his campaign for a fourth title on the European Mile where the qualifying round for the men's shot put is scheduled.

“Winning the European Championships title for the fourth time in a row is my biggest goal. This year I will have to improve my performance to win, but that is what we are training for,” he said.

A focus on healthy living at the Breitscheidplatz

The European Championships will be broadcast in their entirety on the European Mile but there will also be a focus on recreational activity and healthy living.

On several theme days, a diverse framework programme - including interactive events, expert lectures and a daily cooking show - will be offered.

Additional information on health-related topics and sporting activities will be provided daily at the German athletics federation (DLV) information desk where experts will be on hand to answer questions.

Dr Clemens Prokop, President of the Berlin 2018 LOC, said: “For the first time in the history of the European Athletics Championships, a European Mile, which is funded by the European Union, will exist. The European Mile at the Breitscheidplatz will be integrated into the city and serves as a unique platform for topics related to physical activity and health.”

Weekend tickets on sale for 99 euros

Under the motto “save the best for last,“ the organisers are now offering a discounted weekend ticket. For €99 - instead of €130 per person - fans can enjoy the two final days of the European Championships from great seats in blocks 1-3 in the upper tier, almost at the height of the finish line. The discounted ticket, which is valid for the two last event days, is available at www.berlin2018.info/en/tickets.

The admission-free 'Day Q' has also become a big hit. More than 10,000 tickets have already been requested for the qualification day on 6 August.

The free e-tickets are only available online at www.berlin2018.info/en/tickets/.

- Over half a million spectators expected.