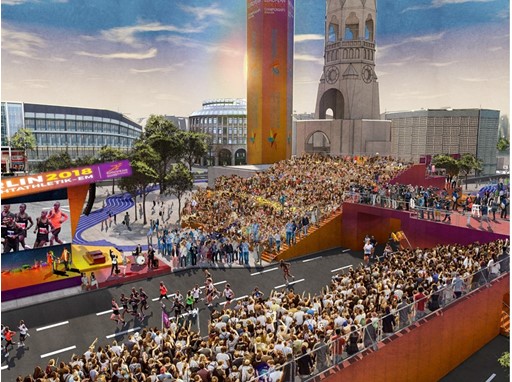 A “European Mile” is set to bring sport and culture to Breitscheidplatz square in the heart of Berlin this summer.

The square will be transformed from 7-12 August as part of the Berlin 2018 European Athletics Championships, acting the finish line for the marathon and walking events, as well as the stage for the men’s shot put qualification and nightly victory ceremonies. All in the shadow of the iconic Kaiser Wilhelm Memorial Church.

A 400m vivid-blue running track will line the entire square, inviting visitors to stroll or run along it. A 3,000-capacity cultural arena will be built to allow spectators to enjoy nightly victory ceremonies on a huge stage. This will be the first time in the history of the continental championships – since 1934 – that victory ceremonies will be held in the city centre of the host city.

The inclusion of Breitscheidplatz in western Berlin into the European Athletics Championships was essential for the city and fully supported by the Berlin state government.

The European Mile was a key part of Berlin’s bid for the European Athletics Championships, and the terror attack in the square in December 2016 only served to underscore its importance. “After the terror attack we wanted to scrap the whole concept for reasons of reverence but all parties involved adhered to the planning and the authorities motivated us to stick with the Breitscheidplatz idea,” recalls Frank Kowalski, CEO of Berlin 2018.

Berlin 2018 wants to include a commemoration to the victims of the terrible attack during the Championships. There are plans for an ecumenical service for the bereaved and a “Room of Silence.”

Visitors to the European Mile will be offered an attractive and diverse program with six road race events in the marathon and walking, the men’s shot put qualification and athletics activities framed by a big show. Within the theme of “Das Sport Festival”, the European Mile, within easy walking distance from the media hotels, will play a key role in the Championships. The fact that athletes, coaches, media representatives, sponsors and officials will be accommodated in the immediate vicinity is a novelty that underlines the special character of the Berlin sports metropolis.

Note to all media representatives

Berlin 2018 has arranged that all media hotels will be at the heart of the Breitscheidplatz. The hotels are close to the city train and underground station Zoologischer Garten, from where it takes about 12 minutes to get to the Olympic Stadium. The reservation period for accommodation ends 30 April. Reservations and payments have to be made prior to this day to secure the booking. For further information, please visit http://www.berlin2018.info/medien/akkreditierung-unterkunft/. In the event that a request for accreditation has to be withdrawn at a later date due to a failed background check, reimbursement for the booking of accommodation can be requested. Should you have any queries, please contact media-accommodation@berlin2018.info.

1.   The 2018 European Championships will be staged by seven European Sports Federations and the Host Cities of Berlin and Glasgow.

2.   The Glasgow 2018 sports programme will start with a day of qualifications on Thursday 02 August and will run until Sunday 12 August, while the Berlin 2018 European Athletics Championships will be held between Tuesday 07 August and Sunday 12 August.

3.   The EBU is the broadcast partner of the Championships and, to date, has signed agreements with almost 40 broadcasters to ensure the event will be viewed by the widest possible audience, free-to-air in all major markets. Its business arm, Eurovision Media Services, will be acting as host broadcaster, through its subsidiary European Production Coordination, and will be responsible for distributing the event to rights-holding media organizations worldwide.

4.   In total, the European Championships will span 10 days of television programming from Friday 03 August to Sunday 12 August 2018. The event has a potential television audience of around 1.03 billion with many more viewers across multiple digital platforms. There will be up to 300 hours of host broadcaster coverage, and an anticipated 2,700 hours of television coverage.

5.   Around 3,000 athletes will travel to Scotland as part of a total delegation of around 8,500 including officials, media and others. 1,500 athletes will compete in Berlin.

6.   Berlin's Olympic Stadium will be the venue for the European Athletics Championships with the road races and race walking events held throughout the city.

8.   Four European Cycling Championships will be staged in Glasgow. Track, Road, Mountain Bike and BMX will attract 650 of Europe’s top names to the Sir Chris Hoy Velodrome, the Cathkin Braes Mountain Bike Trails, the streets of Glasgow and the surrounding metropolitan area, and a new world championship and Olympic standard BMX track to be built in the Knightswood area of the city.

9. The European Golf Team Championships will take place at the Gleneagles PGA Centenary Course in Perth and Kinross.

11. The European Championships for both Rowing and Triathlon will both be staged at Strathclyde Country Park in North Lanarkshire.