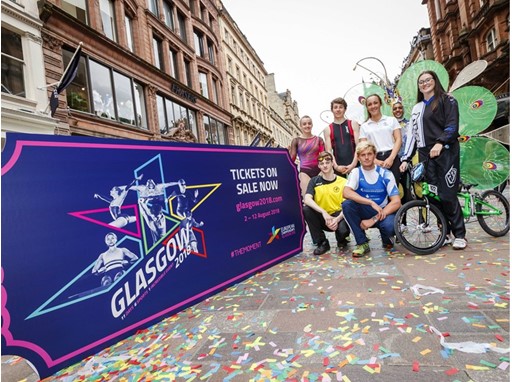 A bundle of additional tickets have been released for the Glasgow 2018 European Championships due to popular demand for the world-first event.
Extra tickets have been released across all six sports – Aquatics, Cycling, Golf, Gymnastics, Rowing and Triathlon – which will be staged between 2 and 12 August over 12 venues across Glasgow and Scotland.
Tickets went on sale on a first come first served basis last year, with sports fans and families snapping up seats for the biggest sporting event hosted in Scotland since the Glasgow 2014 Commonwealth Games.
There are tickets for 84 thrilling sessions of sport taking place over 11 days in August, with prices starting at £10 for adults and £5 for under 16s and over 60s.
Those who secure a ticket will see some of the best athletes from 52 nations compete at iconic venues including the Sir Chris Hoy Velodrome in Glasgow and the Royal Commonwealth Pool in Edinburgh.
Glasgow 2018 Championships Director Colin Hartley said: “We know that people in Scotland and the UK love their sport and the appetite for international multi-sport events is huge. It’s been fantastic to see such an uptake on tickets so far and with less than 100 days to go until the event gets underway, we would encourages fans to buy now to avoid disappointment.”
Alongside ticketed events, Glasgow 2018 will also stage a number of free events including the Cycling Road Race through the streets of Glasgow, East Dunbartonshire and Stirling, Open Water Swimming at Loch Lomond and the Trossachs National Park and Mountain Biking at Cathkin Braes.
Glasgow 2018’s vibrant cultural programme, Festival 2018, will also put on hundreds of unmissable performances and family-friendly events in Glasgow’s George Square, Merchant City, Stirling, East Dunbartonshire and Edinburgh.
One million residents, visitors, spectators, athletes and media will be part of the sporting and cultural experience at Glasgow 2018 this summer.
Tickets can be purchased now from glasgow2018.com/tickets.

The world-class sporting and cultural cities of Glasgow and Berlin will host the first edition of the Championships 2-12 August 2018, and the European Broadcasting Union (EBU) already has agreements with almost 40 broadcasters worldwide to cover the event. There will be up to 300 hours of programming across television, radio and online, free to air in all the main markets, with an anticipated 2,700 hours of television coverage across the Championships.

The vision for the event is to create a must-watch, must-attend experience that elevates the Champions of Europe during an 11-day celebration of sport and packed 10-day broadcast schedule backed by free-to-air television through EBU.

Ends
FOR MORE INFORMATION CONTACT:
Corrie Campbell, Glasgow 2018 Public Relations Officer, +44(0)141 302 2294 / +77(0)7387 253248 corrie.campbell@glasgow.gov.uk
NOTES TO EDITORS
GLASGOW 2018 BACKGROUND INFORMATION:
1. The 2018 European Championships will be staged by the European Federations and the Host Cities of Glasgow and Berlin.
2. The Glasgow 2018 event will be held between 2nd and 12th August and the European Athletics Championships will be between 7th and 12th August in Berlin. Further information is available at www.glasgow2018.com.
3. The European Broadcasting Union (EBU), the umbrella body for Europe free-to-air channels, will be the broadcast partner for the Championships. There is a potential television audience of around 1.03 billion for the event with many more viewers across multiple digital platforms.
4. Around 3,000 athletes will travel to Scotland as part of a total delegation of around 8,500 including officials, media and others. A further 1,500 athletes will compete in Berlin.
5. Berlin's Olympic Stadium will be the venue for the European Athletics Championships with the road races and race walking events held throughout the city.
6. The European Aquatics Championships will take place at Glasgow's Tollcross International Swimming Centre, with Diving taking place at Edinburgh's Royal Commonwealth Pool, Open Water Swimming being staged at Loch Lomond and Synchronised Swimming at Scotstoun Sports Campus.
7. Four European Cycling Championships will be staged in Glasgow and its metropolitan area. Track, Road, Mountain Bike and BMX will attract 650 of Europe’s top names to the Sir Chris Hoy Velodrome, the Cathkin Braes Mountain Bike Trails, the streets of Glasgow and the metropolitan area and a new world championship and Olympic standard BMX track to be built in the Knightswood area of the city.
8. The European Golf Team Championships will take place at the Gleneagles PGA Centenary Course in Perth & Kinross. There will be three European Team Golf Championships: Men’s Team Championship, Women’s Team Championship and Mixed Team Championship.
9. The European Artistic Gymnastics Men’s and Women’s Championships will be staged at The SSE Hydro, the venue for the 2015 FIG World Gymnastics Championships.
10. The European Championships for both Rowing and Triathlon will both be staged at Strathclyde Country Park in North Lanarkshire.
11. The Year of Young People 2018 will be the next of the Scottish Government’s series of themed years, following the Year of History, Heritage and Archaeology 2017. The Year of Young People (YOYP) will inspire Scotland through its young people aged 8 to 26, celebrating their achievements, valuing their contributions to communities and creating new opportunities for them to shine locally, nationally and globally. Further information on what’s happening and how people can get involved can be found on the new website yoyp2018.scot or @YOYP2018 on Twitter.
12. Glasgow 2018’s official partner level sponsors are Glasgow City Council and Scottish Government. For more information on Glasgow 2018’s full sponsor family, please visit www.glasgow2018.com/championships/about-european-championships/official-sponsors