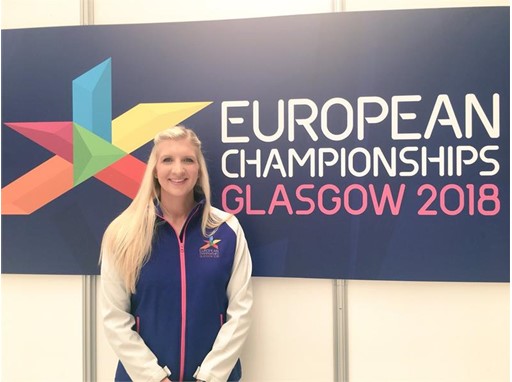 Rebecca Adlington OBE revealed the Team 2018 uniforms at the Glasgow 2018 Uniform Accreditation Centre today (Tuesday 26 June), marking another milestone in the lead up to the Glasgow 2018 European Championships.
The Olympic, Commonwealth and European Championship-winning swimmer was joined by two Team 2018 volunteers and a Team 2018 technical official who donned their uniforms for the first time to meet her.
Rebecca will return to Glasgow in August as part of the BBC team and was keen to meet some of the Team 2018 volunteers to pass on some words of support ahead of what will be a busy and very exciting Champs time.
Team 2018 will be made up of around 5,000 staff, volunteers and officials – all of whom will be wearing the new uniform throughout Glasgow 2018; starting on 2 August and closing on 12 August, after 11 days of incredible sporting action.
Staff and volunteers will wear a predominantly dark purple uniform with hints of light grey, while officials will wear the reverse. The first batch of uniforms will be collected from the accreditation centre at Glasgow Club Gorbals on the 10 July.
The uniform has been launched to the public in advance so that locals and event attendees will recognise them during Champs time and be confident to ask those wearing the colours for any information about Glasgow 2018.
As a double-Olympic gold medallist and a former European Champion in 2010 in 400m freestyle, Adlington was also keen to show support to the 3,000 plus elite athletes who will compete in Scotland this summer.
Rebecca Adlington OBE said: “It’s lovely to be back in Glasgow to meet some of Team 2018 in their new uniforms – they look great.  These eye-catching colours really stand out and will help people know who to talk to for information during Champs time.
“I wanted to meet some of the volunteers ahead of Glasgow 2018 to pass on some words of encouragement ahead of what will be an incredible couple of weeks. Their support and positivity really does make the experience great for attendees and athletes alike.
“I loved my time in Glasgow during the 2014 Commonwealth Games - the atmosphere in the city, and especially at Tollcross, was incredible and I’m sure Glasgow 2018 will be no different.  With some of the world’s best swimmers set to compete, I’m confident we’ll witness some more special moments.
"It's fantastic to see British Swimming and all other European nations confirming their best athletes for Glasgow 2018. I know from experience how hard-fought these European Championships are and I wish all competitors the very best of luck.”
Glasgow 2018 Championships Director, Colin Hartley, said: “It’s incredibly exciting to be at this milestone point in our Championships journey with today’s launch of the uniforms. It is great to have the legendary Rebecca Adlington here to help us reveal these striking outfits – especially as we have so many Aquatics events as part of the 11 days of sporting activity later this summer.
“While Rebecca is visiting the city today, she’ll also be meeting some of our volunteers and young aspiring swimmers - both groups will have the opportunity to ask her what it’s like to be part of a world-class event, such as this summer’s European Championships.”