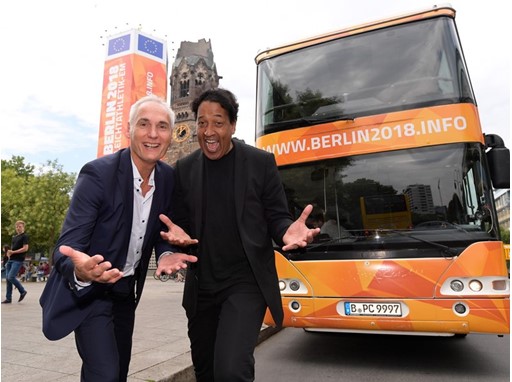 With just 25 days before the start of the European Athletics Championships at the end of last week, the local organisers were able to announce that more than 250,000 tickets for Germany's largest sporting event in 2018 - part of the inaugural multisport European Championships - have already been sold.

Frank Kowalski, CEO of the local organisers Berlin Leichtathletik-EM 2018 GmbH said: "250,000 tickets sold is great news for Germany's biggest sporting event. The Saturday evening session in Berlin's Olympic Stadium is almost sold out. In the coming weeks we hope in particularly to further mobilise the people of Berlin and Brandenburg.”

A key innovation at this year’s European Athletics Championships is the European Mile at the Breitscheidplatz in the City-West area of Berlin.

Konstantin Krause, Director of the European Mile and a former top athlete whose honours included a long jump silver medal at the 1992 European Athletics Indoor Championships, commented: "Athletics is taking an innovative and important step by bringing the victory ceremonies to the city centre. Our emotional performances with custom-composed fanfares, national anthems sung a cappella and 3000 visitors in the arena at the Breitscheidplatz will create a very special atmosphere that we have never experienced before.”

The outfits of the hosts of the victory ceremonies have been revealed and the clothing is made by a Berlin label located in the Bikini Berlin. Clothes are provided by LABO.ART and shoes by Superga.

The daily programme on the European Mile stage will be led by the renowned presenters Verena Wriedt and Matthias Killing.

Wriedt and Killing will appear for the first time shortly before the men's shot put qualification on 6 August at 1700 CET. Afterwards they will be part of the opening ceremony of the European Athletics Championships.

Michael Schulte, Germany's rising music star and fourth-place finisher in the 2018 Eurovision Song Contest, will lead the music for the opening ceremony.

The European Athletics Championships will also build a bridge between sports and entertainment. The special highlight of the daily programme in the Breitscheidplatz is the daily Golden Hour.

Starting at 2200 CET, well-known TV presenter Cherno Jobatey will provide top entertainment. Highlights of the Golden Hour will be the 38 victory ceremonies in the heart of the capital.

Berlin 2018 has also launched a special limited ticket offer: 2500 tickets in price category 2 for the evening session on Tuesday 7 August are available for just €25.

It is the first evening in the Olympic Stadium with several thrilling competition finals including the disciplines men’s 10,000m, shot put and hammer throw as well as both the men's and women's 100m finals.

"We want to turn the prelude in the Olympic Stadium into a Berlin’s evening. Berlin will present itself as a great host, this is why we offer 2500 tickets for €25 at short notice,” explained Kowalski.

The tickets are available at www.berlin2018.info/tickets.

The non-profit children's aid organisation Plan International Deutschland is the official charity partner of Berlin 2018 and together they support the ‘Water for Schools and Communities in Ghana’ project.

Berlin 2018 offers the Plan International Deutschland FanCard for the morning session on Tuesday 7 August for €5 and 50% of the proceeds will go to the project.

In south east Ghana only 20% of the population has access to clean water. The aim of the project is to provide 15,600 members of the community with access to clean drinking water through the construction of wells and sanitary facilities.

The Berlin 2018 mascot Berlino will also support the work of the children's aid organisation during the European Athletics Championships.

"Plan International has been using the power of sport for its projects for more than ten years. Sport gives children, especially girls, self-confidence and a face in their communities. This gives them the chance to stand up for their rights; these rights include the right to health and access to clean drinking water. The fact that the European Championships are now on board is a great benefit for Plan and the people in Ghana," commented Maike Röttger, Chairman of the Management Board of Plan International Deutschland.

Dallmayr a partner for Berlin 2018

Berlin 2018 has another partner on board: coffee specialist Dallmayr.

As one of the best-known German coffee brands and one of the largest delicatessen houses in Europe, the Munich-based family business Dallmayr unites many different business areas under one roof.

Dallmayr Kaffee is the most important line of business of the traditional company and it is a daily companion to millions of people. Dallmayr annually produces around 58,000 tons of roasted coffee at five locations in Germany.