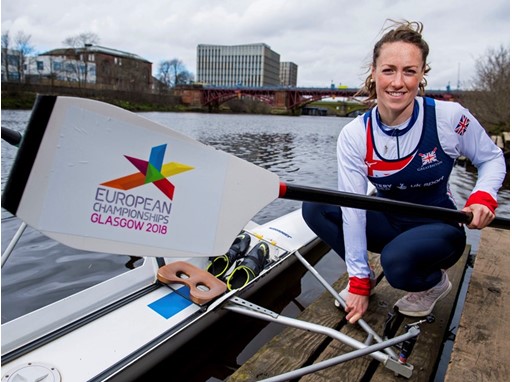 Scottish Rowing star Karen Bennett has been unveiled as the next official ambassador for the Glasgow 2018 European Championships – the biggest sporting event to be staged in Scotland since the Commonwealth Games.

As part of the world-first event, the European Rowing Championships will see around 600 of the continent’s best rowers compete over 18 different medal events at Strathclyde Country Park in North Lanarkshire.

Bennett, who took up the sport aged 18, said: “It’s excellent that this world first, the European Championships, will combine Athletics in Berlin with Aquatics, Cycling, Golf, Gymnastics, Rowing and Triathlon in Glasgow to create one amazing event this August. I’m immensely proud to be named as the Rowing ambassador for Glasgow 2018.

“The European Rowing Championships has a rich history and the crowds in Glasgow and Scotland have a long-standing reputation for being fantastic. I have no doubt that the competition and atmosphere at year’s Rowing event at Strathclyde Park will be thrilling for athletes, spectators, and rowing fans.”

British Rowing CEO Andy Parkinson said: "I'm delighted to see Karen named as rowing's ambassador for Glasgow 2018. Karen is part of a large cohort of Scottish rowers on the GB Rowing Team, and everyone on the team is looking forward to the opportunity to compete on home water this August. Glasgow 2018 plays a key part in the GB Rowing Team's preparations for the Tokyo 2020 Olympic Games and we can't wait to hear the roar of a home crowd at Strathclyde Country Park."

Glasgow 2018 will see world-class rowing return to the venue that hosted the 1996 World Rowing Championships and is the first opportunity for British fans to see the GB Rowing Team in action on home water since 2013.

Sports Minister Aileen Campbell said: “Karen will be a fantastic ambassador for Glasgow 2018 and her dedication to her sport is an example of what can be achieved. It is great to see Strathclyde Country Park staging this event, making the most of the excellent facilities. The rowing events will be something to look forward to as part of a thrilling summer of sport for young people and fans from across Scotland and beyond.”

Councillor Michael McPake, convener of infrastructure at North Lanarkshire Council, said: “We’re delighted to host the European Rowing Championships and welcome visitors from across Europe to what will be a memorable and exciting event for the whole of North Lanarkshire. As the only FISA A-Grade standard rowing course in Scotland, Strathclyde Country Park is a world-class watersports venue and Karen is a fantastic ambassador for excellence in the sport of rowing.”

Glasgow 2018 will see world-class rowing return to the venue that hosted the 1996 World Rowing Championships and is the first opportunity for Scottish fans to see the GB Rowing Team in action on home water since 2013.

Athletes will race in one of two types of boats – a sculling or a sweeping boat – and a range of sizes, from a single scull (one athlete), double sculls or pairs (two athletes), to quadruple sculls or fours (four athletes), up to eights (eight rowers with a cox).

Tickets are on sale now for the European Rowing Championships, with adults starting from £20 and under 16s and over 60s from £10.

1. The 2018 European Championships will be staged by the European Federations and the Host Cities of Glasgow and Berlin.

2. The Glasgow 2018 event will be held between 2nd and 12th August and the European Athletics Championships will be between 7th and 12th August in Berlin. Further information is available at www.glasgow2018.com and www.berlin2018.info.

3. The European Broadcasting Union (EBU), the umbrella body for Europe free-to-air channels, will be the broadcast partner for the Championships. There is a potential television audience of around 1.03 billion for the event with many more viewers across multiple digital platforms.

4. Around 3,000 athletes will travel to Scotland as part of a total delegation of around 8,500 including officials, media and others. A further 1,500 athletes will compete in Berlin.

5. Berlin's Olympic Stadium will be the venue for the European Athletics Championships with the road races and race walking events held throughout the city.

7. Four European Cycling Championships will be staged in Glasgow and its metropolitan area. Track, Road, Mountain Bike and BMX will attract 650 of Europe’s top names to the Sir Chris Hoy Velodrome, the Cathkin Braes Mountain Bike Trails, the streets of Glasgow and the metropolitan area and a new world championship and Olympic standard BMX track to be built in the Knightswood area of the city.

10. The European Championships for both Rowing and Triathlon will both be staged at Strathclyde Country Park in North Lanarkshire.

11. The Year of Young People 2018 will be the next of the Scottish Government’s series of themed years, following the Year of History, Heritage and Archaeology 2017. The Year of Young People (YOYP) will inspire Scotland through its young people aged 8 to 26, celebrating their achievements, valuing their contributions to communities and creating new opportunities for them to shine locally, nationally and globally. Further information on what’s happening and how people can get involved can be found on the new website yoyp2018.scot or @YOYP2018 on Twitter.